Tea Kovše, born 1988 in Slovenia, is a puppeteer who explores the performing area within
puppetry, physical theatre and street theatre. After completing MA Dramaturgy at the
Academy of theatre, radio, film and television (AGRFT) in Ljubljana, Slovenia, she co-
founded Gledališče DELA (Theatre WORKS)- www.zraven.si – a performative theatre
based on puppetry, movement and music. The theatre’s performances focus on social
relations and phenomenons such as: boredom, burnout, mindset and stigma.
She developed the puppet movement method Puppet Parkour where she examines the
relationship between puppet movement and public space.
During the “corona time 2020” she created the Miniature Puppet Theatre MOŽ! –
www.mozi.space, in which she is researching topics of isolation and mental illness.
In the year 2022 she co-founded, with Yves Brägger, a puppet theater named Teater Štrik /
Theater Strick (www.strick.page ) in Klagenfurt and joined The Red Noses company
Austria.
She lives and works in Klagenfurt/Celovec, Austria.
In the year 2021 she won three prices in the festival in Iran;
– Second place for the best puppet show for the young audience (MOŽ! sit with me)
– First place for Manipulating and animating the puppet (The Worm)
– First place for Set design (The Worm) 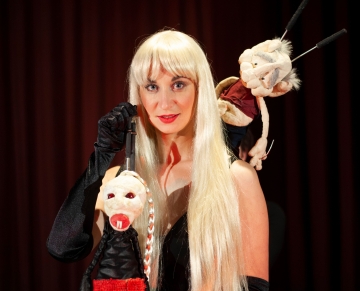 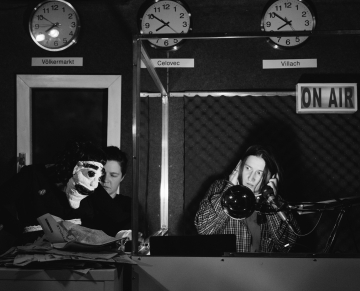